Oh, what, so now you’re special?

I once referred to this episode as the “Mixed Signals” episode. And I think it still holds, in some respects. 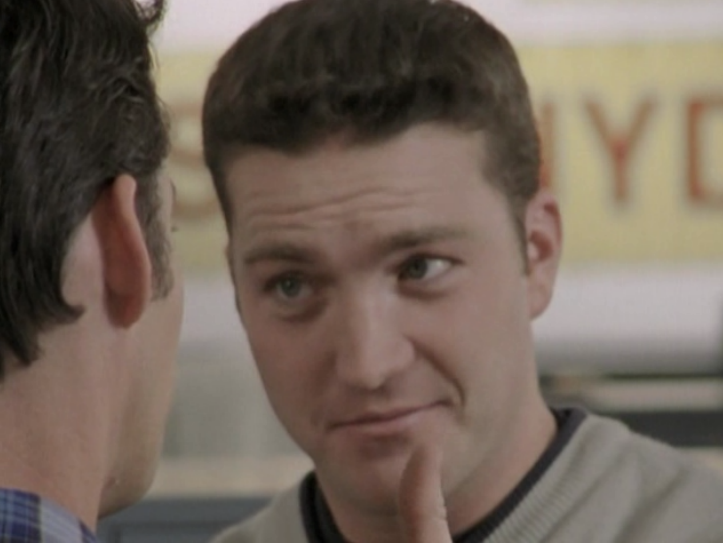 This episode deals a lot with themes of sex and sexual identity, not to mention repression, and it has the added bonus of making the metaphor visual in Oz’s case:

Okay, not the best werewolf I’ve ever seen, but like Giles says, it’s one of the classics!

Lycanthropy lends itself so well to this theme, because it seems so obvious: man literally becomes an animal when he represses his urges. It just so happens that Phases only deals with the guys being asses, but this is an equal opportunity metaphor, since women are just as likely as men to be unable to handle their animalistic side.

Since we have to deal with the guys, however, let’s take ‘em one by one.

To say that I wanted to face-punch Larry repeatedly  in the first half of this episode is an understatement. He was just such a pig. But then, of course, we find out he was dealing with some pretty big issues. I’ll admit, I have no idea what it’s like to be a gay man in such an image-conscious setting as a typical high school (obviously), so I have no idea how delicately Buffy dealt with this issue. I am sure, however, that there are those who overcompensate so much that there is no way someone would think they’re gay—like Larry. And that other guy from Glee.

What does make me sad is that there are apparently no other out gay students in Sunnydale High so that I can see how in-denial Larry deals with them. I would wish that it wouldn’t be as disgusting as how he dealt with women, but now there’s just no way of knowing.

What I love most about Larry’s realization is that all he really needed was a chance to say it out loud. His silver bullet is just a sympathetic ear. And while Xander was completely clueless about what it was Larry needed to confess, he still served as such. I also love that it’s Xander, who’s so concerned with his masculinity (much like it seemed Larry was), who finds out that Larry’s gay. I daresay it challenges a couple of his preconceptions, just like it does Larry. Or it should.

Which brings us to…

I bet Xander never thought he’d have relationship issues, but hey, there they are!

Now, I don’t wanna get too deeply into this yet, since Xander’s issues aren’t resolved as neatly as Larry’s and Oz’s in this episode (and the episode directly following this will also explore Xander’s character), but I just wanted to point an aspect of his that keeps popping up—he tends to be way overprotective of both Buffy and Willow… but only when there’s another guy involved.

I think it’s tied into his assumptions as to what being a guy means, but I also think it’s his streak of possessiveness. It’ll appear again, so I’ll try to address it then, but I just wanted to mention it now, since it’s brought up in this episode.

In the meantime, let’s turn our focus to…

It could be the benefit of hindsight, but it seems to me that it’s more obvious that Oz should be the werewolf than anyone else.

Of all the guys we’ve seen, he’s the most reserved, the least likely to show overblown emotion.

And in the same way that Larry repressing his true self brought out a monster, Oz being so reserved brings out a real one.  We already know from Willow that they’ve barely rounded first base, and we know that wolf is attracted to sexual energy.

It’s also worth noting that when he tries hardest to hide from Willow, the wolf emerges:

I love that his dismay at discovering he’s a werewolf can be read as mixed signals, too. How often have mixed signals been sent because someone’s trying to figure out their own shit, or worse, tried to hide something? Well, here you got both.

Given the implication, I’m not sure how crazy I am with the solution being to lock Oz up for three days every month, but considering the alternative: 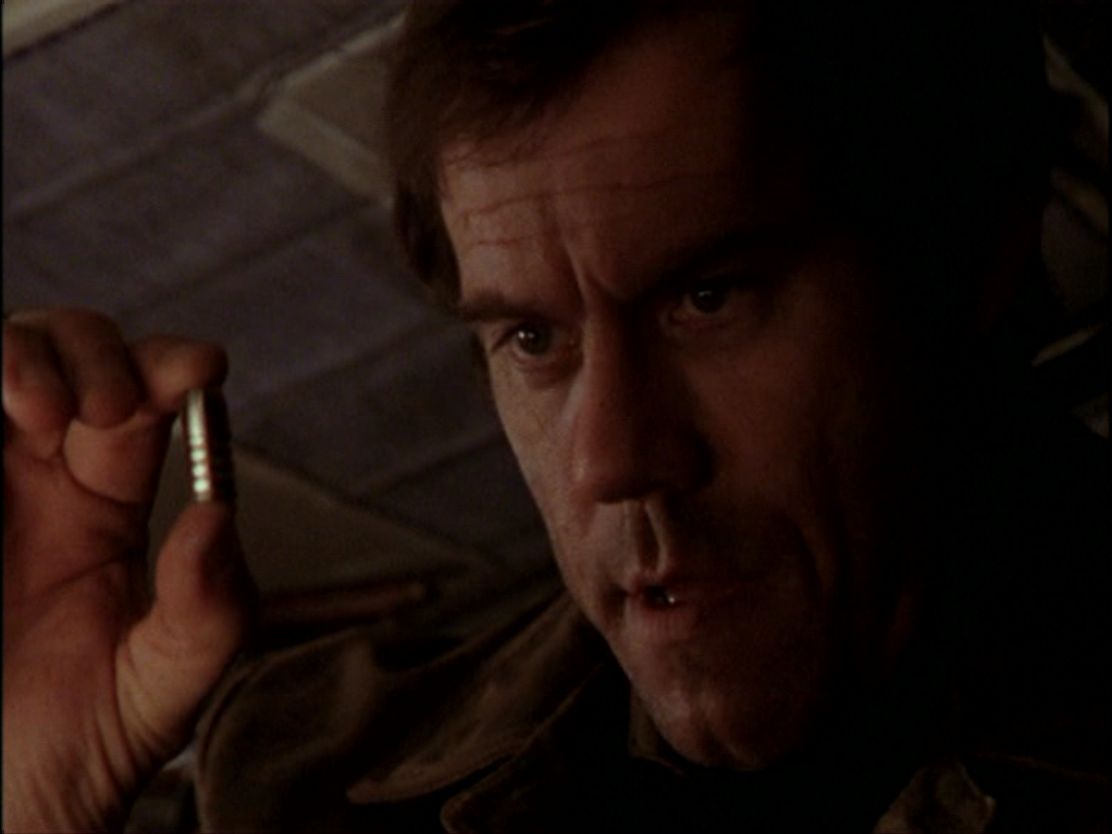 At least Oz is being honest with and about himself. And that’s totally a grown-up thing to do.

I’ve mentioned before that Buffy’s relationship with Angel seems to be driven purely by her fantasies.

That’s not to condemn or mock her, it’s just a statement of fact. Buffy’s still a young girl, and it’s not like society doesn’t tell young girls that Princes Charming exist, and that we’re all entitled to “happily ever after.” It’s something she can be forgiven for doing, is what I’m saying. Unfortunately,

I mentioned in the review for Surprise that there is a brilliant strategy in this being the episode named Innocence, and now I get to elaborate.

In addition to pushing fairy tale romances, this culture has a habit of linking virginity to innocence and naïveté, and maybe that’s right in some cases, but… not this one. Buffy loses her virginity in Surprise, but she loses her rose-colored glasses here, in one of the most brutal scenes ever (which was flawlessly executed, in my opinion).

Due to a clause in Angel’s curse (which totally makes sense, you guys, really!), his one night with Buffy turns him into King of the Douchebaskets, and Buffy is forced to deal with the monster she’s inadvertently created.

Let’s be clear here: this is not saying that Buffy is to blame. As Giles says, while she may have acted rashly, her decisions were understandable, given the information she had at the time. She wasn’t stupid, she wasn’t tricked, she’s not a slut. She’s a girl in love. By the way, fuck you, Joss Whedon, for making that scene so goddamn believable. Just—the “I thought you were a pro” line kills, you sadistic bastard.

Also, how awesome is it that the sex scene is shown in this episode rather than last, after we know that Angel’s changed? We’re not meant to be titillated or swoony, Whedon just wants to kill all that is left of joy. Thanks, guy.

Fuck, I need a drink.

Well, I’ll give it to them: they certainly did that.

Here you have it, folks: The episode that launched a thousand Claddagh rings. I’m not even ashamed—I had one myself. Two, actually. My mom gave me one once she resigned herself to the fact that I was hopelessly in love with a fictional vampire. The pandering worked, okay?!

If you spend any kind of time with me, you wouldn’t take me for the sigh-y, romance-loving, love conquers all kind of girl, and for the most part, you’d be right. But that’s now, after Joss Whedon ripped my heart out, hollowed it out, did some kind of paso doble on it and then shoved it haphazardly back in my chest. Because that’s what he does. The writing thing’s just a hobby, really.

After living on the Hellmouth for a year (?), Buffy should really be careful what she wishes for, because clearly, the Hellmouth has a warped idea of “birthday gifts.”

She also gets a Drusilla that’s alive, and a deceiving, deceitful deceiver of a computer teacher. 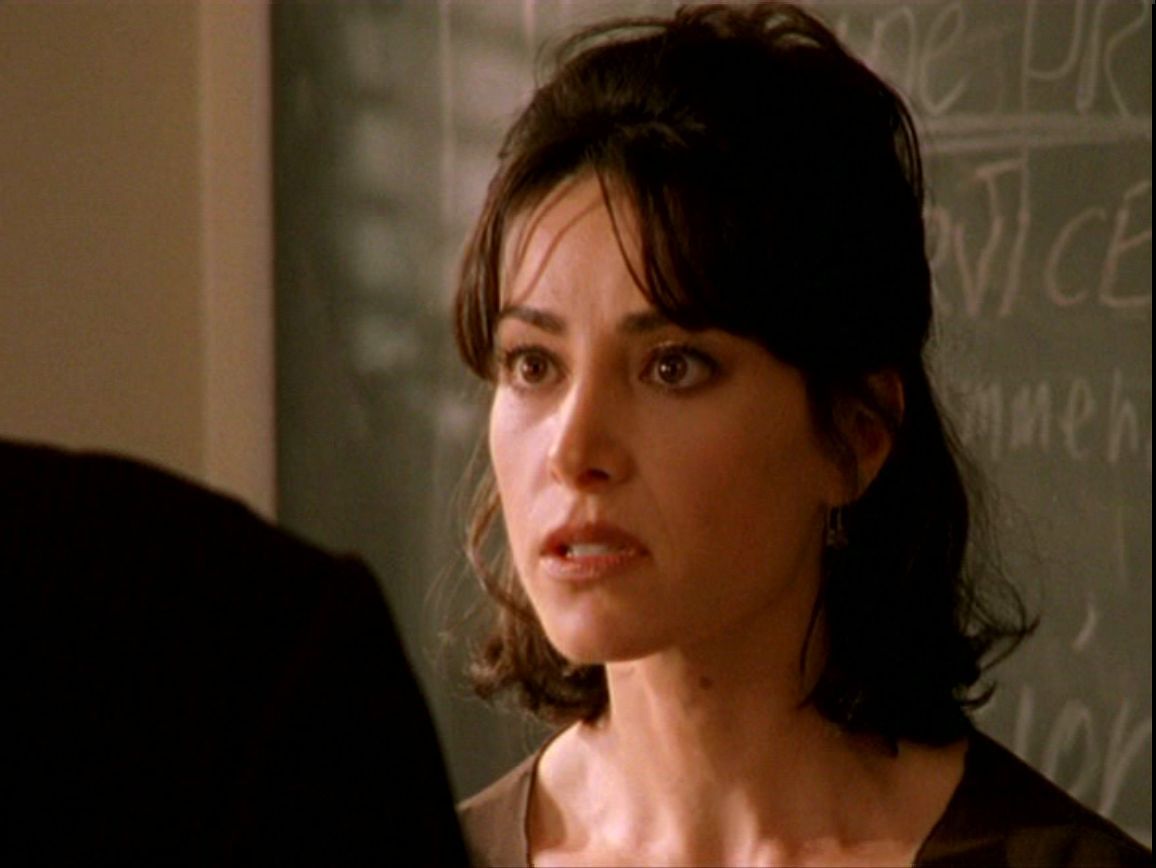 I knew something was up when she got our national pastime wrong. It’s baseball, FYI.

Anyway, since this is a two-parter, a lot of what goes on in this episode is really just drawing up the plans for the building that will be Innocence. Not to say that the setup isn’t important, because it is!

If we’re looking at show mythology (always a good time), the Judge gives us a great clue: Drusilla and Spike stink of humanity. Soulless beings can “stink of humanity”?! I thought all that shit fucked off when the demon set up shop. I mean, that’s certainly what Angel and Giles said. What is a soul if it’s not a marker of humanity?

A plot device. Badly defined. An amorphous concept roughly analogous to a conscience.

But hey, we’ll get to that. Probably in a soonish time frame.

Based on the show’s theme, however, this episode gives us another important rite of passage: Buffy’s first sexy tiems.

It’s undeniably brilliant that this episode is not the one titled Innocence, because Whedon—clever ginger that he is—knows that virginity =/= innocence. And that’s something we get to explore in the next review. I can’t fucking wait! Haha, get it? “Fucking” wait?

Innocence review will be posted sometime tomorrow, since I don’t like to leave two-parters hanging. See you then!