You know, for a while, I was feeling kind of bad for Ampata. Which was, of course, the point. And it’s easy to, considering the clear parallels between her and Buffy’s fates.

…Er, without the whole sucking the life out of people thing.

Still, Ampata (wait, why do we call her that? I mean, that’s not her name…) was chosen to sacrifice herself at a young age to save the world. All she wants is a normal life. Although how normal that life would be when she has to take sucking-the-life-out-of-people breaks throughout the day is a mystery to me. Still. The desire is understandable, and one with which Buffy is highly familiar.

However, Ampata is prepared to go much further than Buffy to fulfill that desire, and this is what ultimately makes her the bad guy. Shades of Invisible Marcie.

The mummy tries to get out of her duty (and a shitty duty it is, admittedly) by forcing other people to take her place. Buffy can’t. And what’s more, I don’t think she would. With the mummy as an example, she knows that way lies badness.

Sidenote: It’s interesting how Xander takes so quickly to Ampata. I like to think it’s to emphasize how similar her plight is to Buffy’s, and to show some consistency in Xander’s character re:what he finds attractive. From the perspective of the character it would seem to be because she’s hot and exotic and blah de blah blah, but we, as viewers can make all sorts of theories, and I choose to make this one, so there.

Another thing to note: Xander tries to sacrifice himself. I don’t always like him, but this habit of his is an admirable (albeit stupidly reckless) trait.

I think this episode is good for both Xander and Buffy. Buffy’s grown-up enough to realize that the unfairness of her Chosenhood is not an excuse to trample upon other people (something, you’ll remember, that she learned back on Never Kill a Boy on the First Date), and Xander is big-hearted enough to sacrifice his happiness (and himself) for his friends.

I got this in the mail today, and I cannot stop grinning like a fool:

From now on, we're gonna have a little less ritual... and a little more fun around here.

School Hard is about a regime change.

We can say goodbye to the gaping void that was the Anointed, and we do it with a punk rock song in our hearts. Probably a Ramones song. Or maybe Sid Vicious.

Anyway, while Buffy has to deal yet again with the demands of real life vs. Slayer life, our focus is sort of drawn to the fundamental change in vamp life.

They go through growing pains, too, these vamps do, and it’s interesting to see how. At first, they’re preoccupied with digging up the past; their chance at a resurrected Master is gone, but hey! There’s a nifty ancient vamp holiday coming that promises lots of carnage and maybe a Slayer chaser.

Problem is, they’re approaching it from the same angle that the Master was, just one short season ago--i.e., waiting for the… I don’t know, is it called a religion?—to drop everything in their laps. And we all know how well that worked out for him.

Enter Spike (and Drusilla, but it’s not like she does anything besides look fragile and spew crazy). Not only is his way strangely not the “old” way, it’s worked before. Twice. Which suggests that the ritualism doesn’t work, especially against Buffy, who’s as modern as it gets. So a change of tack is called for. Except… it doesn’t work.

Why? Well, because despite Spike being all new and modern, he somehow still expects Buffy to be traditional and old-timey. Nope. 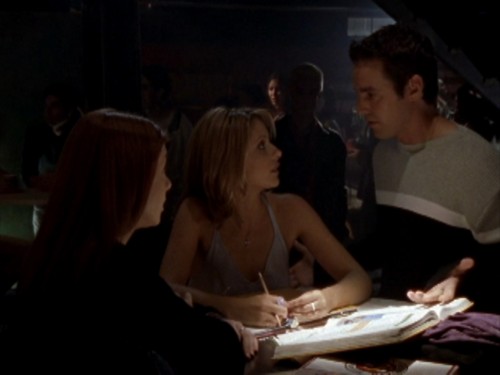 And let’s not mention, she has inside knowledge:

And while it may seem like this episode is all about the Slayer stuff and not so much about the growing up, consider this: Growing up is all about shedding old preconceptions and changing your views in light of new information.

Guess the lessons don’t always come from the Buffy and Friends side of the equation.

Another addition to the family!

Another Buffy blog has risen to spread the gospel of our fearsome savior!

And at least 50% belongs to a friend of mine, so if you’re not afraid of spoilers (and really, if you are, it’s your own damn fault for not having watched before now), go ahead and check it out:

Once More, With Extreme Prejudice

Go, my children, and spread the love of the Slayer with you!

It occurs to me that I’d promised that this would be a half-project half-personal blog, and it’s been more of a 7/8-project 1/8-personal blog. So I guess I should try to talk more about me, which will be interesting, since my narcissism begins and ends at Facebook.

Part of it is because I don’t really feel my life is all that interesting, and part of it is ‘cause I have this lingering feeling that no one cares even if it is. And that’s fine. I love being my own biggest fan. I like me and will probably have me over for pizza and beer often.

But a toll is a toll, and a promise is a promise, so I’m gonna make an effort to inject more of myself into this thing.

However, since I’m not kidding that my life isn’t all that interesting, the “me” posts are probably going to be a collection of assorted rants about any and/or all of the following:

I have decided that I will indeed cover the Buffy the Vampire Slayer movie, but it will be at the end of the series coverage, and it will be in a comparative capacity.

I still haven’t decided whether I’ll do Angel, because despite it technically being part of the ‘verse, I’m (a) not as familiar with it as I am Buffy, and (b) the series diverge pretty drastically after a certain point. I don’t know, I’ll think about it. I KNOW you meant to say gross and disturbing.

This one took a while ‘cause let’s face it: this episode rivals I Robot, You Jane in suckitude. There is really no excuse for an episode featuring so much Cordy to suck this bad, so I’m docking ten points from Joss and Co. for this.

From a “real world” perspective, the episode is all about love and how it makes you do the wacky, which I’m pretty sure someone says straight out in the episode. I think it was Willow. I don’t know, this episode is so bad I wasn’t giving it my full attention… There were kittens on the internet.

From the show’s perspective, though, we have more mythos-building, what with “undead” now also including talking zombies, and there being such a thing as a flesh-eating demon, which… there’s really no need for that. Like, ever. Why would they even?

If we’re to take anything from the episode, it’s this:

Xander: […] people don't fall in love with what's right in front of them. People want the dream. What they can't have. The more unattainable, the more attractive.

And sure, this is true from a teenager’s perspective because unless you have the face and body of [insert hot person here], a lot of the people you crush on will probably be unattainable.

However, growing up means realizing that unattainable does not always equal attractive. I mean, I’d say Newt Gin—well, no, he’d bang a lightpost. Uh… I’d say that Ann Coulter is unattainable, and she’s pretty much the least attractive person in the universe to me.

Love doesn’t mean shooting for the stars. Love means… love. If anything, it’s an equalizer. Exactly every one is made a fool by love at least once. Which is why it makes people do the wacky. Even Angel, apparently. Anyway, this episode sucks more than it doesn’t, and it seems to make me rambly, so I’ll stop now. Stay tuned, the next one’s much better.


Yeah, yeah, I know. I kind of fell into the holiday rush and have neglected this bad boy yet again. But in my defense, there was a lot of alcohol to be drunk and a lot of killer heels to be worn, and I consider it my sacred duty to do both. I do it for the good of everyone, honest.
However, I will not deny that it’s kind of shitty to leave you guys hanging, which is why my title/quote for this one is what it is. Fitting, really, since Buffy is one for most of this episode.

Although, to be fair, Buffy is dealing with some pretty serious post-trauma here. I mean, she like, died and shit.
Being intimately introduced to your own mortality leaves its mark. Some people would react to something like that by living harder. Buffy? Well, she reacts by fighting harder. With… everyone, really.
When She Was Bad has two things to note:
1) Buffy’s Giles dream, and 2) what happens  when Buffy cuts herself off (something she’ll do more than once, actually).
Buffy’s dream suggests that she blames Giles for “killing” her, for not protecting her. If we step back and look at the metaphor for a minute, Giles is one of the main forces pushing Buffy to grow up. So of course, if Buffy’s looking for someone to blame for losing part of her childish self, it’ll be Giles. And poor Giles! Buffy’s pretty cold to him for much of the episode. Part of it is the blame, but part of it is also the whole distancing thing she’s doing with everyone else.
Buffy alienates pretty much everyone in this episode, so much so that Cordelia notices. It does make sense, however, because who else to try to set Buffy on her path than one of her shadow selves?

And Cordelia is right (as is the case more often than you’d think). Buffy’s attempt to have a little “less from the civilians” is disastrous. It leads to Willow being captured, along with Giles, Ms. Calendar, and Cordy herself. Xander is injured, and Buffy is even more emotionally vulnerable than she was when she went to face the Master alone. The moral of the story? You can’t do this alone. Not the Slayin’,  and not the growin’ (up).