We’re all concerned about how gross you look. 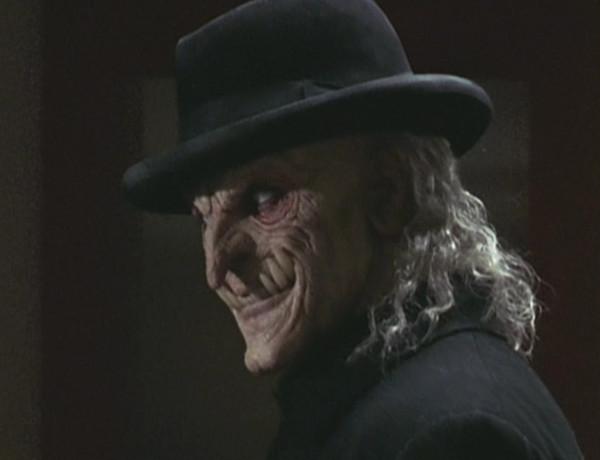 Okay, seriously? This fucker is one of the most relentlessly creepy monsters Buffy’s ever had.

It’s not just that he’s just so ugly, but it’s… the hat. I don’t know why, it just gives him that little extra “gyeurgh!” Also, he does this:

Which—NO. NO THANK YOU SIR I AM QUITE COMFORTABLE.

Besides that special little cupcake up there, there’s really not much to say about Killed By Death. Except… well, Cordy was pretty on in this episode. I mean, besides my title for this post, she got some brilliant lines in this one, including one of my personal favorites: “Tact is just not saying true stuff. I’ll pass.”

Oh, and she also was the one to find and identify Monsieur Creep up there.

And I know I’m using “and” a lot here, but she also joins Angelus in dropping some truth bombs on Xander re: his White Knight syndrome when it comes to Buffy. She’s right, too—it’s not attractive, and it’s insensitive to Cordy, which I’m pretty sure is against most of the laws of man. Not that he ever gets reprimanded at all for it, but this is my issue, and it will come up many times, I’m sure. Someone has to do it, and it might as well be me.

As for other things… well, Buffy has to face her fears in this one, and at diminished operating power, too, since Der KindestOhGodWhatIsThatThing can only be seen when one is burning up with fever. 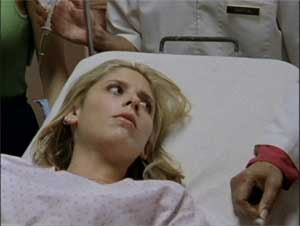 Not to mention that Buffy’s freaked out by hospitals anyway (right there with ya, Buff) because her little cousin died in one when she was 8 and hey, by the way, that thing you have to fight is exactly the thing that killed your cousin, so…

Oh, side note: How cute is it that bitty Buffy used to pretend to be a superhero? The phrase “be careful what you wish for” comes to mind, but it’s also another layer in the delicious cake that is our petite heroine. Is it now any wonder that despite how thoroughly it fucks up her life, she still does her duty by mankind? The girl has the savior gene.

Now. About this metaphor… I’m not sure what to make of it. It can be one of many things: facing mortality at an early age (something done so much better in Prophecy Girl, imo), Angels of Death (those scary people that kill sick people in hospitals because of… reasons?), or—and I think I’ll go with this last one—people who prey on children especially.

As Giles so aptly says, there are lots of monsters that grown-ups can’t see but children can, and many times it’s just plain old people… Wait, not old people… What I mean to say is people who appear “normal.” And just like Der Kindestod, they can very well suck the life out of children—figuratively, if not literally. Fuck, now I’ve gone and depressed the shit out of myself.